Drainage and pavements go hand in hand because we want our pavement structures to efficiently deliver water to our drainage systems (catch basins and storm drains). To the degree that water flow is effectively managed at the surface, pavements will last much longer. We can install and repair a variety of structures related to drainage, including: 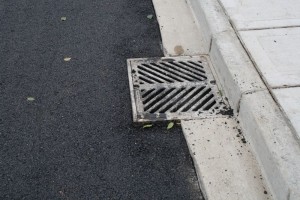 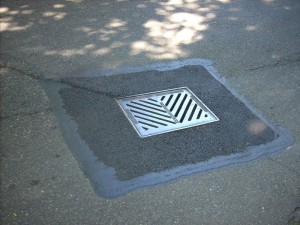 What can be done about sinking catch basins?

A common problem is for catch basins to sink relative to the pavement surrounding it at the surface. Rather than replacing the entire basin or raising it, we can install “risers” to bring the grate and lid back to a proper surface grad and perform a patch around it.

Why is it so important to perform repairs around catch basins?

If not repaired, asphalt or concrete damage around a catch basin can lead to damage to the actual basin itself, which can be exponentially more expensive to repair. Because pavement structures are designed for water to flow to the catch basins, any holes or deterioration can be subject to accelerated damage because of the erosion process.

What is a dry well?

At the surface, not much is different. We still have a catch basin to capture and collect the water. But rather than the water flowing into a storm drain system that would eventually discharge into a lake, stream or Sound, it instead flows into an underground well that is dug and filled with drain rock so that the water can slowly permeate into the surrounding soil. Dry wells are not designed for large amounts of water, but are useful if a storm drain system is not available. Furthermore, they can be more ecologically friendly because any contaminents are allowed to permeate slowly into the soil rather than being deposited into sensitive water areas.

What is a trench drain?

A trench drain (also called a channel drain, line drain, slot drain, linear drain or strip drain) is a long, narrow and shallow drain meant to collect water across a wide area. They are often used around the entrances to garages, or in areas that are relatively flat without much fall.